Dr. Emily M. Frisby, Fort Monmouth Climatologist: “Weather can be made to work for the world, if it is interpreted properly.” 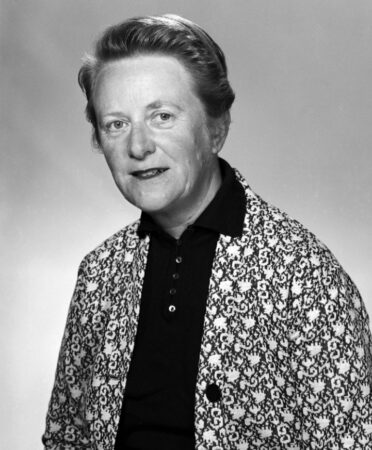 Editor’s note: On June 8, 1968, the U.S. Army began a two-day conference on tropical meteorology at the Marine Sciences Center in Coral Gables, Fla.  Noteworthy among the moderators and presenters was Dr. Emily M. Frisby (pictured above) from the U.S. Army Electronics Command (ECOM) at Fort Monmouth, who delivered a research paper on tropical fog.  Her research was designed to help military planners better understand conditions under which heavy fog in the south Pacific could “impede or render hazardous many combat activities.”  Frisby was another example of Fort Monmouth’s emphasis on having the best and brightest scientists on staff regardless of race or gender.  The following profile of Dr. Frisby has been contributed by Monmouth University Specialist Professor Melissa Ziobro.

Dr. Emily M. Frisby was known to say, “Weather can be made to work for the world, if it is interpreted properly.”

Climate change may seem a modern-day concern, but the study of weather’s impact on humankind — and what we might do about it — is nothing new. In the mid-20th century, Dr. Emily M. Frisby made climatology her life’s work. Born in England on September 13, 1907, Frisby attended schools in Leicester and the University of Wales. During World War II, she served as a meteorological officer in the Women’s Royal Naval Service (the women’s branch of the United Kingdom’s Royal Navy). Post-war, Frisby made her way to the United States. For eleven years, she directed climatological research at a Denver research institute, then became a professor in weather engineering at South Dakota State College before obtaining a doctorate at Reading University. She joined Raven Industries in 1960 and became a weather balloon expert. Her passion for balloons was expressed in her 1963 poem, “Vulcoon Flight.”

In 1966, she joined the U.S. Army Electronics Command (ECOM) Atmospheric Sciences Laboratory at Fort Monmouth as chief of the Atmospheric Modification Task Group.

Frisby’s career was devoted to “climatology for the public benefit,” the title of one of her many conference panels. She traveled the world — Europe, the United States, Middle East and Africa — seeking answers to questions such as: Could humans find a way to stop dangerous, destructive lightning and hail? Could we seed clouds to produce rain and battle droughts? Frisby, whose research was published in academic journals and government reports, disliked the term “rain-making,” saying it smacked of magic; instead, she preferred “weather modification” to describe her work. A resident of Spring Lake Heights, Frisby died in July 1993 at the age of 85.

Melissa Ziobro, M.A., is the Specialist Professor of Public History at Monmouth University in West Long Branch, N.J., and the primary point of contact for the public history minor. Her service to the University includes administration of the Monmouth Memories Oral History Program and the Department’s social media and newsletter. She serves as the campus coordinator for the National History Day program, and the faculty advisor for the History and Anthropology Club.

She worked as a command historian at the U.S. Army Communications-Electronics Command, Fort Monmouth, N.J., from 2004-2011.