Atlantic Highlands was incorporated as a borough by an act of the New Jersey Legislature on February 28, 1887, from portions of Middletown Township, based on the results of a referendum held that day. The borough was reincorporated on September 1, 1891. Atlantic Highlands contains Mount Mitchill, the highest point on the eastern seaboard south of Maine, rising 266 feet (81 m) above sea level. The borough's name comes from its location overlooking the Atlantic Ocean. On June 6, 1896, George E. Harbo and Frank Samuelson departed New York City in a specially made rowboat and headed for Le Havre, France, on an ocean journey that would last 55 days and cover 3200 miles. Harbo, 27,
Continue Reading A Timeline of Vito and Anna Genovese in Monmouth County

Editor’s note: Vito Genovese was involved in criminal activities from his early years in New York City and continued to run the rackets even after he was finally behind bars for good.  His nefarious deeds have been extensively chronicled elsewhere
Continue Reading On October 16, 1929, at the height of Prohibition, federal agents raided an isolated house atop the ridge in the Navesink section of Middletown, overlooking Sandy Hook Bay (pictured above...the person in the photo is unidentified). Before 1920, the house
Continue Reading On March 30, 1932, Vito and Giovaninna "Anna" Petillo (nee Vernotico) were married in New York.  Anna ran nightclubs and gay bars in Manhattan during these years, some of which were not on the mafia books.   It was the
Continue Reading On June 28, 1935, Vito Genovese purchased a 35-acre (other accounts set it at 42 and 24 acres) property at 152 Red Hill Road in Middletown from Mrs. Florence Sperling.  The estate was originally part of a large farm owned by
Continue Reading On December 13, 1935, while the family was living in Middletown, Vito filed a petition to become a naturalized U.S. citizen.  On November 25, 1936, his petition was granted and Vito became a U.S. citizen in New York City.  On
Continue Reading On February 23, 1937, the Middletown mansion that was home to "king of the rackets" Vito Genovese and his wife Anna, and their children, burned down.  An oil burner was thought to be at fault, but the exact cause was
Continue Reading Vito Genovese Returns to America, and to Monmouth County

On August 27, 1944, Vito Genovese was placed under arrest in Italy by U.S. Army Criminal Investigation Division Agent Orange C. Dickey, who had recognized Vito from wanted posters.  With the war nearing an end, Dickey had difficulty finding anyone who
Continue Reading Vito Genovese Asserts Himself on the Monmouth County Docks

On July 10, 1947, Vito Genovese, Andrew Richard, and Louis and Dominic A. Caruso formed a new corporation called the Atlantic Highlands Wharf Company, that “handles freight and passenger transportation at the yacht harbor.”  The company acquired the railroad pier
Continue Reading Vito Genovese and His Son Run Into Trouble in Freehold

On March 26, 1950, Philip Genovese, 18, son of Vito and Anna, driving his father's car, crashed into a parked vehicle on Route 9 in Freehold, injuring five people. The initial newspaper report at the time erroneously stated that Vito was
Continue Reading On December 8, 1952, Anna filed a lawsuit against Vito Genovese in Superior Court in Freehold, seeking $300 monthly “separate maintenance” financial support for her and son Philip, and $5,000 in attorney’s costs.  In the initial hearing before the Chancery Court
Continue Reading On March 2, 1953, Anna Genovese took the stand in her “separate maintenance” case and testified before the judge in Superior Court in Freehold County Courthouse.  Anna's attorney was Osie M. Silber, a deputy attorney general.  She asked the judge for
Continue Reading On Day Two of the Trial, Vito’s Witnesses Testify

On March 3, 1953, the second day of Anna Genovese's Freehold trial where she sought "separate maintenance" financial support from her estranged husband Vito, 22 witnesses were called who would testify mostly on behalf of Vito.   Anna took the
Continue Reading On March 4, 1953, just two days after Anna’s explosive open-court testimony, the Caruso Construction Company of Atlantic Highlands won a lawsuit against Vito seeking $32,724 for labor and supplies for the 130 Ocean Blvd. mansion, for which no payment
Continue Reading 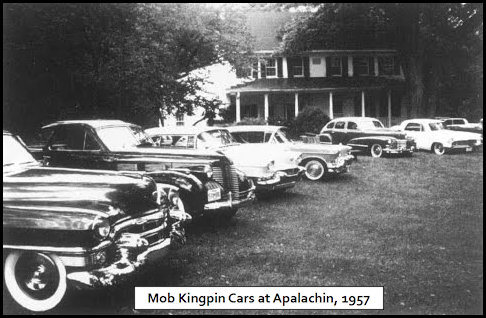 The Meeting at Apalachin: The Beginning of the End for Vito Genovese

By the late 1950's, it was estimated that there were between 25 and 30 major organized crime families across the United States, with an army of approximately 5,000 “made men,” or formal members. On November 14, 1957, more than 100
Continue Reading On July 7, 1958, narcotics agents of the U.S. Treasury Department placed Vito Genovese under arrest at his home on Highland Avenue in Atlantic Highlands. Along with his longtime associates, Vincent “The Chin” Gigante, and Carmine Galante, Genovese was named
Continue Reading On February 14, 1969, Vito Genovese dies of congestive heart failure, at the U.S. Medical Center for Federal Prisoners in Springfield, Missouri; he had been imprisoned at the United States Penitentiary, Leavenworth, Kansas.  An attorney for his estate said he
Continue Reading A certain house said to be located in Atlantic Highlands is the subject of two stories in the Monmouth Timeline, both related to Prohibition and smuggling. On October 16, 1929, Federal agents launched a major assault on illegal liquor in
Continue Reading