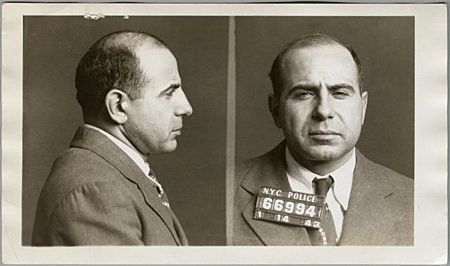 He was born in a Harlem tenement in 1910, but his ancestral roots were deep in Castellammare del Golfo, the Sicilian seaside city that was a cradle of the Bonanno mafia family. In 1931, Joe Bonanno became paterfamilias of an established crime clan that would eventually take his name. “Joe Bananas” continued a tradition of stocking his organization with men like Carmine Galante, who understood the language and customs of the old country.

Galante grew up in New York City reform schools, and by age 20 he was working as a freelance mob slugger, enforcing the byzantine treaties that carved up the Prohibition Era turf and spoils.

“With a gun in his hand he feared no one, including cops — and he made a bad habit of shooting them.” He escaped indictment for lack of evidence in the murder of police officer Walter DeCastillia during a Brooklyn Heights payroll heist in March 1930. By 1940, Galante was carrying out mob hits for Vito Genovese, the official underboss of the Luciano crime family (and at that time, a resident of Middletown Township).

In 1943, Genovese, who had fled to Italy to avoid murder charges pending in the U.S., offered to kill Carlo Tresca, the publisher of an anti-fascist newspaper in New York, as a favor to Italian dictator Benito Mussolini. Genovese allegedly gave the murder contract to Galante. On January 11, 1943, Galante allegedly shot and killed Tresca as he stepped outside his newspaper office in Manhattan. Although Galante was arrested as a suspect, no one was ever charged in the murder.

In 1958, after being indicted on drug conspiracy charges (along with Vito Genovese and others), Galante went into hiding. Federal agents discovered Galante was hiding out in a house on Pelican Island, off Toms River (then known as Dover Township), in Ocean County. The followed him onto the Garden State Parkway, and pulled him over to place him under arrest. After posting $100,000 bail, he was released. The man known as “The Cigar” beat the rap, but soon ran afoul of mafia leadership and was gunned down along with two companions in Brooklyn in 1979 while dining at a restaurant (pictured below).