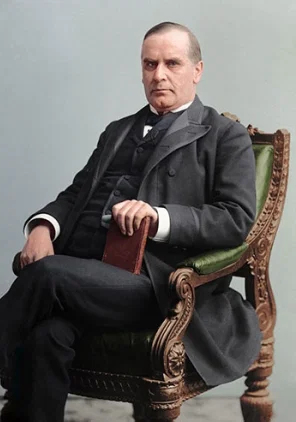 On Friday, August 25, 1899, William McKinley, 25th president of the U.S., gave a speech at the Ocean Grove auditorium, following a presidential parade through the streets of Asbury Park. In his speech, about matters concerning the end of the Spanish-American War, the President spoke about the American flag, and what it symbolizes: “…wherever that flag is raised, it stands not for despotism but for liberty, opportunity and humanity…that flag does not mean one thing in the United States, and another thing in Puerto Rico and the Philippines.” Later, the President said of his visit, “I was simply overwhelmed when I first came into that auditorium. It was one of the grandest ovations I ever saw.” Just 27 months later, McKinley would be dead from an assassin’s bullet. McKinley is one of the seven presidents to visit Monmouth County during the 19th century, in addition to Ulysses S. Grant, Rutherford B. Hayes, James A. Garfield, Chester A. Arthur, Benjamin Harrison and Woodrow Wilson.